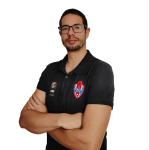 We split the team into two, each team has only one ball. The players start on the coach’s signal, dribble to the cones and shoot a jump shot or go for a layup depending on what kind of competition you want it to be. After the shot, they recover the ball (the rules can be different for different age groups, for the older kids you can give one shot, for the smaller give them a jump shot and a chance to go for a layup for fewer points). After they rebound the ball, they dribble back to the end of the queue of their team. Everyone spreads their legs and the player who shot the ball passes it between the legs to the first in line (this prevents starting from a position earlier or moving towards the ball if they pass it from under the basket).

International Youth Basketball Coach with experience in Europe(Serbia and Romania) and Asia(China). Coaching kids and developing their skills with the end goal of creating better adults with good values.